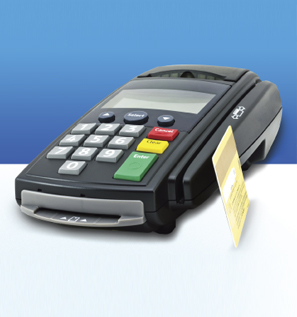 EMV – the term is getting popular and you might have heard about it. It is considered as a safer option than “regular” magnetic strip credit cards.

EMV stands for Europay, MasterCard, and Visa. It facilitates interoperation of cards that have an IC chip in them. EMV cards are replacing traditional credit and debit cards in many parts of the world.

How does it work?

EMV uses the code that is embedded in the chip on the card. Any typical EMV works in these steps:

After the process has been done, the merchant verifies the signature of the card holder to validate the transaction.

Advantages of the system

Besides Canada, countries in Europe and South America have already implemented the EMV system. EMV adopters in Europe saw a 67 percent decrease in card related fraud during the very first year of the implementation of the system. Participants in Canada have also reported similar success.

Meanwhile, there is a substantial increase in card related fraud in the US. The country has been slow to implement EMV. Needless to say; card frauds, identity thefts, and data security violations grabbed a lot of headlines in recent times.

Since internet based online payment systems are always under attack, we need stronger security measures. Any institution that hasn’t implemented the effective multifactor authentication method is at risk. Events like Target data breach further exposed the vulnerability of the existing system. Luckily, the situation is improving as more institutions have recognized the advantage of EMV.

EMV is being rolled out in the US, and will become the major card technology in the year 2015. Presently, about 1%-5% credit cards have EMV, and you should prepare yourself because the EMV adoption is going to skyrocket in the coming years. Last year; MasterCard, American Express, Visa, and Discover began to roll out the EMV rules. These rules have had an impact on transaction processors, merchants, issuers, and just about everything that is directly or remotely associated with the transaction.

EMV isn’t only about a card with a built-in chip. It is the technology that makes the difference. Since EMV will have an impact on the customer experience, all companies should develop a plan to implement it.

After the Target data breach, card processors are taking too long to issue new cards. Because of this long wait, more customers are now getting drawn towards the EMV chip.

Offer your customers a safe environment for financial transactions. More and more people will adopt EMV in the coming years. Are you ready for EMV enabled customers? Those who adopt the system early will have an edge over those who are late to the party.